This research is made possible by our dedicated Associates.
Join us

Feline hyperthyroidism more common in the Northwest and East coast 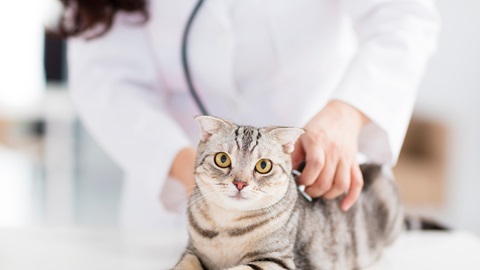 Feline hyperthyroidism (FH) is a common disorder, but little is known about its causes, leaving veterinary teams and cat owners without reliable means of prevention. As a step toward elucidating the causes of FH, we mapped age-adjusted disease prevalence among privately owned cats that visited Banfield Pet Hospitals across the continental U.S. over the course of many years.

We shared the results at the recent American College of Veterinary Internal Medicine (ACVIM) Forum in Austin, TX. Overall, FH occurred in 177 of every 10,000 cats, but its prevalence was above average in the Pacific Northwest and along the Eastern seaboard. In contrast, parts of the Gulf Coast and Midwest had relatively low FH prevalence. Pinpointing regions of high and low FH prevalence can inform the design of studies to identify factors that might contribute to the development of FH.

What this means for veterinary teams
Although effective treatments are available for FH, its causes are not well understood, and there is currently no way to prevent it. By recording the data needed to fuel analyses like this one, our veterinary teams are integral to the research effort to discover the risk factors for FH.

This knowledge could help veterinarians to recognize which cats are most likely to develop FH and lead to new strategies to prevent the disorder in the future, improving the quality of veterinary care.

Overview of FH
FH was first diagnosed in Boston in 19781 and described at the ACVIM Forum in 1979.2  Its prevalence has increased markedly since then,3  and FH is now the most common endocrine disorder in cats.4  It most often occurs in middle-aged or older cats,1 with fewer than 5% of cases occurring in cats less than 8 years of age.3 Up to 10% of senior cats are estimated to have FH.4 Various therapeutic modalities are available, and treatment is usually successful, but no preventive strategies have been proposed because the underlying causes are not known.4

Mapping FH across the U.S.
The prevalence of FH varies in different countries,6 and we wondered whether variability also exists within the U.S. The geographic distribution could offer clues about how the disorder develops. We reviewed electronic medical records of privately owned cats that visited 1,084 Banfield Pet Hospitals between 12 July 2020 and 17 July 2021 and identified cases of FH. We then calculated the disease prevalence by state using Banfield’s overall feline population as the standard population. Overall, FH occurred in 177 of every 10,000 cats, but its prevalence was not uniform across the country. Ten states in the Pacific Northwest and Atlantic coast, along with the District of Columbia, had FH prevalence ≥200 cases per 10,000 cats, whereas eleven Gulf Coast and Midwestern states had FH prevalence <140 cases per 10,000 cats. Studying differences between these regions might help pin down which factors contribute to the development of FH.

Factors associated with FH
Although the specific causes of FH are not known, various factors seem to be associated with the disorder, and it is likely that more than one of them contribute to its development.3 One such factor is age: older cats are more likely to have FH.5 Another suspected contributor is genetics; FH seems to be relatively less common in Siamese, Burmese, Persian, Abyssinian, and Himalayan breeds.5 High levels of iodine in the diet might lead to FH.3 Finally, exposure to certain thyroid-disrupting chemicals in the environment might also be associated with FH but definitive proof does not exist; these compounds include bisphenol A (BPA) found in food cans, phthalates (sometimes used in cat litter), and polybrominated diphenyl esters (PBDEs) from flame retardants.3 Knowing which of these factors might influence risk of developing FH could help owners and veterinarians provide the best care for cats.